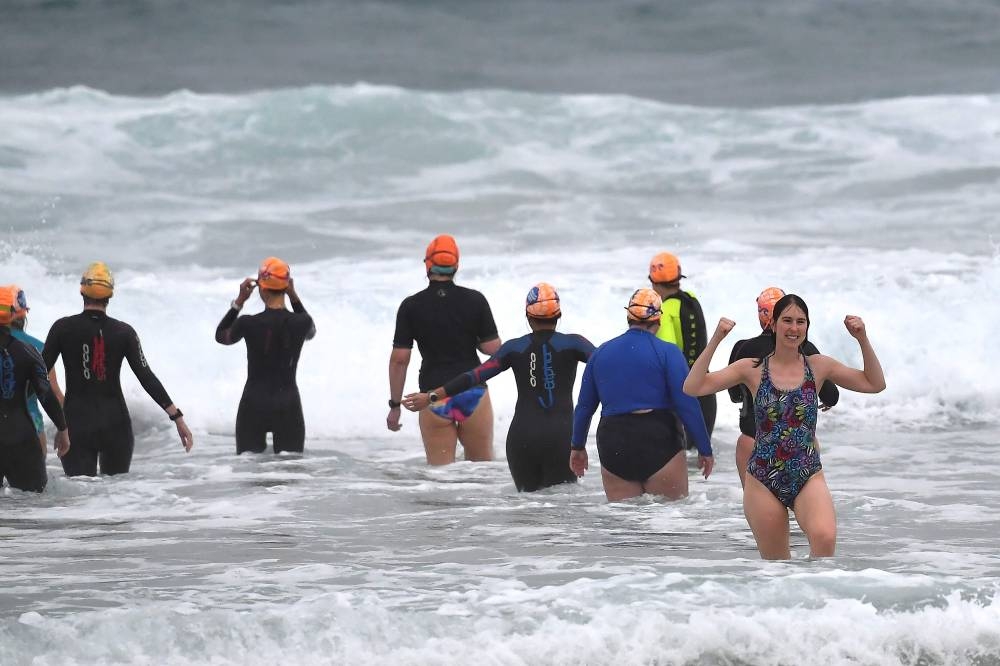 Residents enjoy big waves on the Bondi beach at the end of 106-days lockdown in Sydney on October 11, 2021, as a long coronavirus lockdown lifted in Australia's largest city. AFP PHOTO

SYDNEY: Elated Sydneysiders defied gray skies and rain to celebrate the lifting of almost four months of lockdown on Monday, hoping to put behind them a period of "blood, sweat and no beers" in Australia's largest city.

Sydney's more than 5 million residents have been subjected to a 106-day lockdown, designed to limit the march of the highly transmissible Delta variant.

Cafés and restaurants threw open their doors to anyone who could prove they were vaccinated while shaggy haired customers lined up outside hairdressers to get their home cuts and hair dyes repaired.

"It's a great vibe this morning," said Hannah Simmons, owner of Gordon's Café in the beachside suburb of Clovelly, who survived the lockdown hit to her business by offering takeaways including dinners.

"The outside seating will be a bit dreary but that's ok. We are really excited to be back there and open. That's great."

Outside the café, builder Nick James said getting work had been "up and down" in the construction business during the lockdown. "It would be nicer if it was a bit more sunny but what can you do," he said.

For many, the end of lockdown was a chance to get into the shops. At midnight, hundreds of people poured into a discount Kmart store in the western Sydney suburb of Mount Druitt with social media images showing long queues forming inside.

Since June, shops, schools, salons and offices have been closed for nonessential workers and there have been unprecedented restrictions on personal freedom.

There were bans on everything from travelling more than 5 kilometers from home, visiting family, playing squash, browsing in supermarkets to attending funerals.

There will still be limits on mass gatherings and international borders and schools will not fully reopen for a few weeks yet. But, otherwise, daily life will look more like normal.

For most of the pandemic, Australia successfully suppressed infections through border closures, lockdowns and aggressive testing and tracing.

But the Delta variant put paid to any dream of "Covid zero," at least in the largest cities of Melbourne and Sydney, which are now pivoting to "living with Covid."

"It's a big day for our state," said New South Wales' recently appointed conservative Premier Dominic Perrottet. After "100 days of blood, sweat and no beers," he said, "you've earned it." But despite the celebratory mood, there are lingering concerns about what reopening will bring.

"There's obviously a lot of excitement but it certainly has to be tempered by making sure we continue to look out for each other," Perrottet told national broadcaster ABC. "That's been our success in the past. Everybody is making enormous efforts to get vaccinated."