Orange County officials are looking into why their Coronavirus vaccine registration app Othena didn’t notify some people of their vaccine appointments being impacted by the closure of the county’s mass vaccination site in Disneyland due to supply delays.

“We are aware that some people did not receive the notification and (are) currently looking into the reasons,” said the county’s Acting Public Health Officer and Health Care Agency Director, Dr. Clayton Chau, in a text message Friday.

It comes after Voice of OC — following the closure of the Disneyland site on Thursday — received a flurry of frantic messages from residents and readers on Thursday night, unsure of whether or not their appointments would be impacted.

And some county residents on the internet discussion platform Reddit had alleged they never learned about their changed appointments until they arrived — only to get turned away. 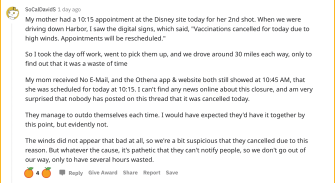 “I encourage people to check their email, spam mailbox, etc.,” Chau said, adding that residents can call the number 714-834-2000 for more information.

Earlier in the day, county spokesperson Molly Nichelson said “people are being notified of the delays, particularly with those within the impacted sites today.”

A spate of severe weather conditions across the U.S. had delayed some shipments of vaccine supplies, county officials announced on Thursday.

As a result, they closed their “super” vaccine “point of dispensing” (POD) site at Disneyland and announced the closure of the county’s “medium” POD site at Santa Ana College — aimed at narrowing vaccination rate disparities with nowhite and vulnerable populations — beginning Feb. 20.

As to whether county officials still believed that delay was possible, Nichelson said “we’re (assessing) the vaccine situation and will notify folks prior to Feb. 24.”

This isn’t the first time the app has thrown a wrench into the county’s vaccination distribution strategies.