'Who's Had It?' Back On Trail, Trump Touts His Own Bout With The Coronavirus

President Trump dances after his hour-long speech to supporters at a rally in Johnstown, Pa., Tuesday evening. Jeff Swensen/Getty Images 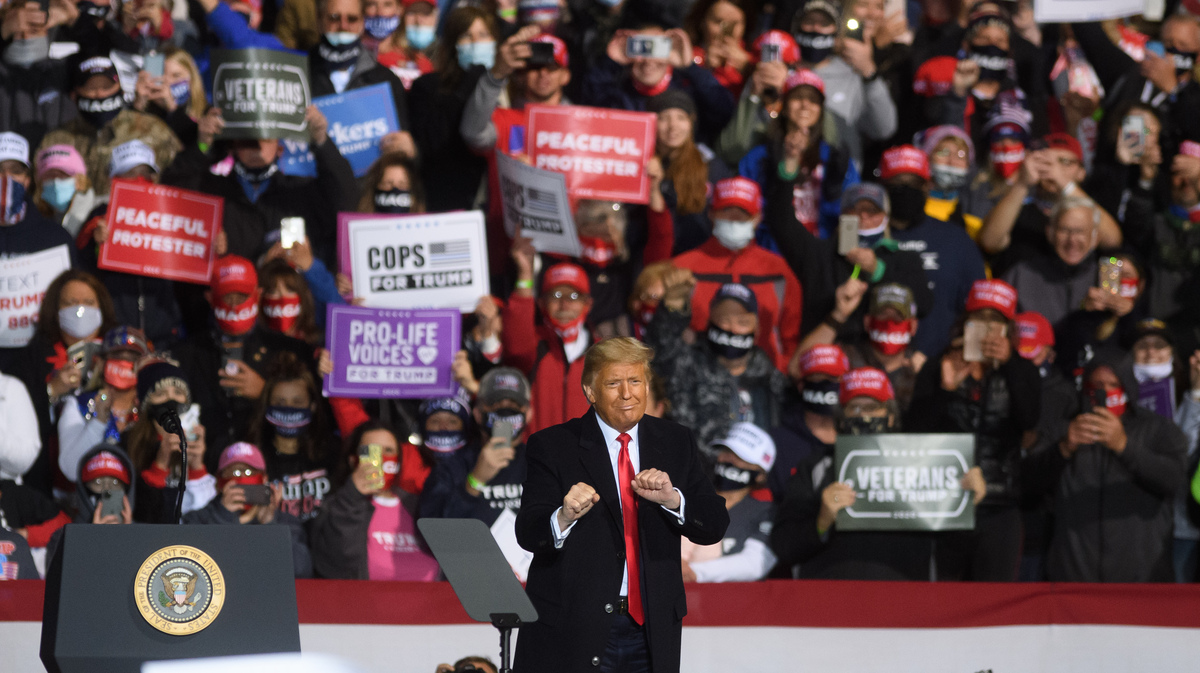 President Trump dances after his hour-long speech to supporters at a rally in Johnstown, Pa., Tuesday evening.

Back on the campaign trail after being hospitalized with the coronavirus, President Trump is seeking to make the case that his first-hand experience with the pandemic is an asset and not a liability.

"To everyone fighting to recover from the virus, I feel your pain because I felt your pain and we will beat this virus together," Trump told a packed crowd in Johnstown, Pa., on Tuesday.

Trump, as he often does, polled the audience. This time, it was about who else has had the virus. "Who's had it?" he said, asking for a show of hands, and receiving a smattering of cheers in return. "Yeah, a lot of people, a lot of people," he said.

To critics, the fact that the White House experienced a "super-spreader event" that led to Trump, his wife and more than a dozen close aides and associates getting the virus is emblematic of how lax the administration has been in trying to contain the pandemic.

But Trump — who was in and out of the hospital and cleared for travel in the span of 10 days — is now using his own experience to double down on his optimistic message about the country's recovery from a pandemic that has killed more than 215,000 people, infected almost 8 million others, and left millions out of work.

Trump's sunny outlook on his recovery from COVID-19 is in line with the way he's handled the pandemic from the beginning. He has fashioned himself as America's cheerleader against the "plague" and has often argued that better times are just around the corner.

It's not clear that message was working even before Trump's diagnosis and subsequent hospitalization rocked his campaign two weeks ago. Trump has been down in the polls against the Democratic nominee, Joe Biden, with Trump's handling of the pandemic receiving low marks.

While Trump is now one of the millions of Americans who have contracted the coronavirus, as president, he receives a level of medical care that is out of reach for most.

Trump is pointing to experimental treatments, including an antibody cocktail made by Regeneron, that he received as potential "cures."

"The drug that they gave me, I'm going to — we're going to be distributing it all over the country to hospitals and everything else because I'll tell you: that sucker works," Trump said in Pennsylvania.

It is far from certain, though, whether these types of experimental drugs really work and whether they will be available to most Americans any time soon.

Trump has also been claiming he and others who have survived the virus are now "immune" to it, even though there's not scientific consensus on how long antibodies to the virus last, preventing reinfection.

Since leaving the hospital, Trump has been arguing that the public should not allow the coronavirus to "dominate" their lives.

With the death toll and case load continuing the climb, the risk for Trump in the final days of his campaign is that people don't believe his optimistic message and instead focus on negative headlines about the pandemic.